window.dataLayer = window.dataLayer || []; Beerkit Muntons Gold Docklands Porter 3Kg | HBS - Homebrew Set | Homebrew | holzeis - homebrew & grillshop
Mehr erfahren
Cookie preferences
This website uses cookies, which are necessary for the technical operation of the website and are always set. Other cookies, which increase the comfort when using this website, are used for direct advertising or to facilitate interaction with other websites and social networks, are only set with your consent.
Configuration
Technically required
These cookies are necessary for the basic functions of the shop.
"Allow all cookies" cookie
"Decline all cookies" cookie
CSRF token
Cookie preferences
Currency change
Customer recognition
Customer-specific caching
Individual prices
Selected shop
Session
Comfort functions
These cookies are used to make the shopping experience even more appealing, for example for the recognition of the visitor.
Note
Statistics & Tracking
Affiliate program
Track device being used
Categories
Information 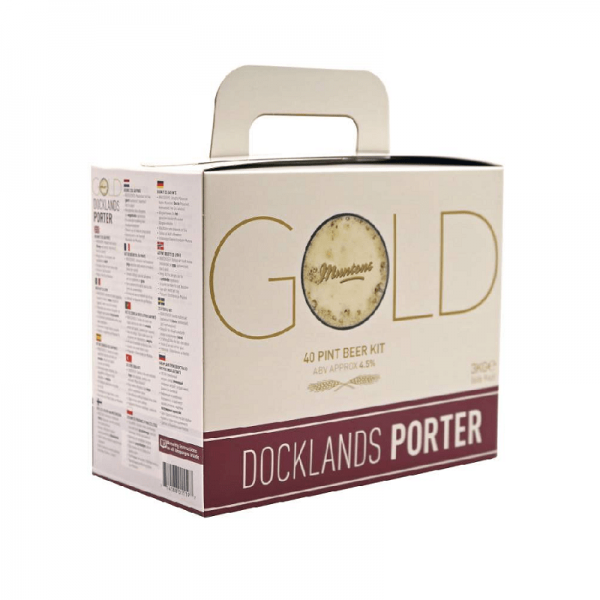 Muntons Gold range (3 kg)
Muntons top range for brewing â€œall maltâ€? beers without the addition of sugar. These GOLD packs provide fuller beers that should beguile true beer lovers. Granular yeast and instructions for use inside the cover.

Docklands Porter
At the end of the 19th century a beer was brewed especially for the dockyard workers of the bustling Port of London. Docklands Porter was named after these strong men, who unleaded the cargoes of sailing ships and schooners berthed at the many wharves along the Thames. Porter had a uniquely rich and satisfying flavour which quenched the thirst of dockers after long shifts loading and unloading vessels from around the world. You can now recapture the unique flavour of traditional Victorian Porters - a light hop character and full malt flavour under lie a rich colour, possible by the subtle use of the best roasted malts.